A group including a priest and my mum accompanied me. As we drove into the first village on a rocky unsealed road, all of the villagers began to emerge from their huts and gather around our cars. They were waving and excited to greet us.

As we emerged from the cars, the villagers were jostling to grab our hands and kiss them in greeting. I started to feel a bit overwhelmed and the whole thing felt surreal. I felt like they had mistaken us for someone important.

The universal language of a smile

Later the children gathered in the centre of the village and were desperately trying to communicate with us. I didn’t have any idea how to speak Tetum so we began singing nursery rhymes and doing actions to try and connect with them. The smile began to grow on their faces in appreciation of our efforts.

As we spent time with them our interpreter took me over to meet two young girls in the village. He told me they were similar to my age. The girls were at least a head shorter than me and very thin. I was shocked; they looked like they were half my age.

They have so little, but gave us so much

The village elder then came forward and welcomed us. He spoke emotionally of the hopes for his people and the gratitude they felt towards us for coming so far to meet them. We had not forgotten the people of Timor Leste.

We shared a meal with them, which would have been a great sacrifice, of their meagre resources.

Our turn to give back...

Upon my return from Timor Leste, a group was started to support and raise much needed funds for the people of Letefoho in Timor Leste. This was to become LETS - Letefoho East Timor Support.

You can find out more About us and our Projects and Programs, and learn what's new from Our Publications.

You can help in the very simplest way just by Liking us on Facebook or Twitter, or adding some information about us on your social media page.

What might seem like a very small thing to you, could make a whole world of difference to my new brothers and sisters of Letefoho! 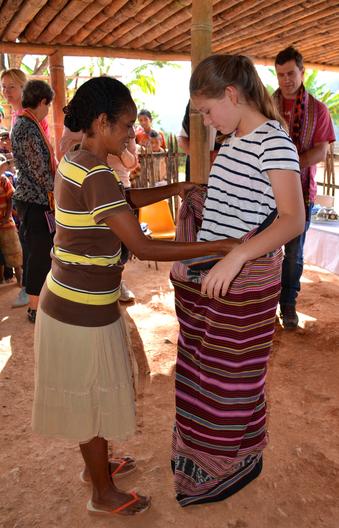