In a short space of time I had attended a few weddings, celebrations and festivals while I was there.  Such special times for the community and to be included as community member was a privilege.  My last few days in Dili included an invitation from Sr Virgilio to join the Salesian order in Dili to witness the signing of final orders for 3 nuns who choose to commit as a nun in the order for the rest of their lives.  It was full of music, involvement and exciting service. 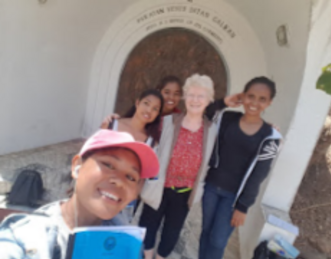 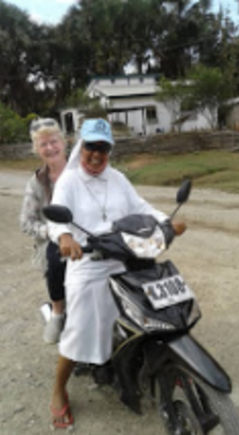 So started my four weeks of volunteering, Monday to Friday, (1.5hours in the morning from 9 to 10.30am for the young adults and 1.5hours for the clinic staff in the afternoon from 4 to 6pm).  Also teaching the staff at the parish house some English too which lead to a lot of laughter at the meal table.  It was such an eye opening and rewarding experience.

The volunteer program is a perfect way to experience village culture by living in the community, getting to know the local people, learning their language and being invited into their homes.  I was amazed how quick the students advanced in speaking and generally understanding basic English and using it to converse as we discussed everyday use of English to introduce themselves, introduce others to the class, talk about the weather, body parts, etc.  This was particularly so, as I do not speak their languages.  With limited resources you will get many opportunities to be creative!  I can give you lots of ideas on how that can happen. 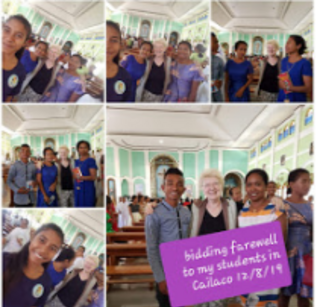 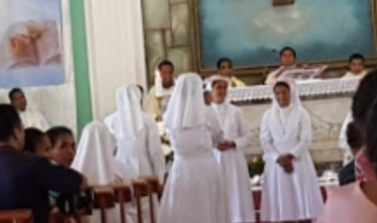 Shortly before leaving Timor Leste I met this group of girls in Dili.  They wanted to have a conversation in English as part of a school assignment.  They are so motivated to learn.  It would be wonderful if more people and organisations helped to give them that opportunity.

Their enthusiasm left me feeling motivated to explore possibilities with the parish LETS group on my return.  Wouldn’t it be great to have a stream of English teachers/volunteers/students visiting regularly, coming to the villages to help local teachers and students use a language (English) that could pave the way into an exciting future for a country that has fought so hard for its independence.

The support, direction and involvement of Lower North Shore Parish in the development of Letefoho is very evident and the excitement on our arrival was extraordinary, from being greeted by the students and the parents who want to progress and compete in their careers for the future.  Our Parish has provided facilities for water to be pumped and stored on the mountain top, school facilities for the girls and accommodation for girls to stay during the school year, boys will have similar quarters too.  School fees provided by some of our parishioners provide stability for students to complete their education as families would not have the resources to provide it and many of the children would have to walk many miles each day to get to the village, something we would take for granted. 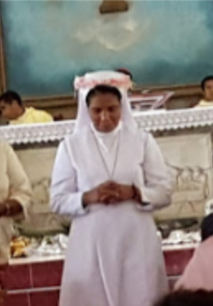 After the Parish anniversary festivities in Letefoho I went to the small township of Cailaco, on the other side of the mountain range.  My plans to live and work there as a volunteer were experimental in that I did not know of anyone in the Parish who had done this before and had no idea how or whether it would work out.

Walking through the village of Cailaco, the beauty of the landscape and people made it hard to comprehend that it is one of the poorest areas in the world.  I was distracted by the tall palm trees and pristine countryside and the kindness and sincerity shown by the locals, on my arrival with the Parish Priest Amo (Fr) Norberto, for Mass. The respect and genuine hospitality were palpable, as elderly parishioners took my hand and either kissed or just touched it with their forehead and younger people took and kissed my hands as a mark of respect.

Unexpected customs can be quite confronting initially but I felt very privileged to be a volunteer in Cailaco and as the concept [of volunteering] is still a bit cloudy there it was great to be able to talk to the managers/staff/villagers about why I chose to come, and what made their village and its people so special in my eyes.

I stayed in the Parish house and interacted with the locals and a group of Salesian sisters.  Following a conversation with Sr Virgilio and her sisters in the Salesian order, it was decided that I would teach English to two independent groups, the young adults from the newly formed Agricultural College program and the Staff of the medical clinic in the village.

As English is not part of the education curriculum (they learn Portuguese together with Tetun – the native language - and Fretilin) we decided I would give English classes to both groups, for different reasons.  The young adults are starting their careers and as English is seen as a global communication language in the commercial world an introduction to conversational English might be an advantage in their education.  While the medical staff often attend seminars and on-going education given by visiting medical consultants, this poses a challenge for the staff to comprehend what is being said when English is the mode of delivery.

MY MONTH IN TIMOR LESTE AS A VOLUNTEER TEACHER

Every year I volunteer my skills, services and time to a foreign country as part of my holiday abroad.  In July and August 2019, I spent just over a month in Timor Leste.

Initially I went to join in the 25th anniversary celebrations of the Parish of Letefoho which has a special connection with the Parish of Lower North Shore as ‘twin’ Parishes.

The village of Letefoho is approximately 4 hours’ drive out of Dili in the mountains, keeping in mind I did it in the dry season, it most certainly would be more in the wet season.

Letefoho is a very active village developed on the top of a ridge and surrounded by mountains and spectacular views way down to the coast, it almost feels like you are in paradise on earth.Type your paragraph here.

Having time now to review the situation and all that occurred, it is sad to think that the experiment of teaching English in Cailaco may end with my departure.  My vision for the village and villages like it would be to see a continuous program for teachers to continue a program of English as a Second Language and increase their fluency in the language by teaching teachers and students from the schools and colleges around Cailaco and other villages, giving them the opportunity to converse with other countries and follow up education for progressive students.  Young adults and students are eager to learn and experiment with the language, as they prepare to negotiate their careers into the future.

I’m not a certified teacher.  More a certified lawyer and registered nurse (RN) and Midwife, who has spent many holidays over the past 10+ years teaching English as a Second Language in many countries in some very colourful situations, from Monasteries to China high schools, Fiji island schools, and many Asian and European schools. I think sometimes I am more “educated” in the process than the students, as you learn their culture, customs and share in their activities.  I rarely know the language of any country I have visited but somehow, I’ve managed to get the students speaking English at a basic conversational level.