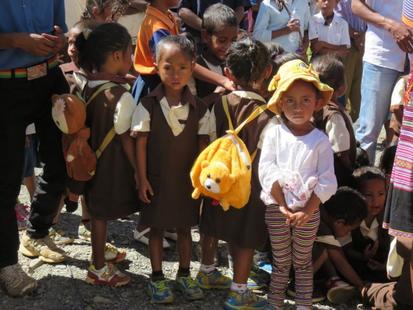 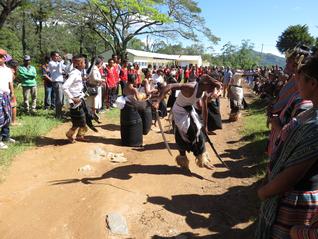 "They want to give their children the best they can...

This school gives them hope!"

After years of generous donations, waiting, praying and a lot of hard work by so many people, Letefoho High School was finally back in business - but better than ever!

Several highly respected elders and the Letefoho community, volunteer and paid teachers and officials from surrounding villages were also present.

This moving event began with a traditional Timorese welcome of dancing and procession into the school grounds and the gifting of tais to all members of the official party, including the six members of our tour. Such a unexpected and humbling privilege to experience!

Fr Helio blessed the grounds; prayers were prayed and hymns sung by the whole crowd, including the infant class children who are taught by the residing nuns. Senor da Conceição cut the ribbon. Meanwhile, I had the priviledge of representing LETS and unveiling the school banner. Fr Helio then led a procession through the school while blessing each office and classroom.

Footballs, including those donated by our LETS member, Fiona Wotherspoon, were gifted by the ministers of education, as were school supplies of books and pencils, from our tour group members. These had been generously donated by teachers from St Thomas’ Primary School, Willoughby, of the Lower North Shore Parish.

After speeches from all officials and a dance exhibition by students from two of the most remote villages of Letefoho, a banquet lunch was enjoyed by all. The food was superb!

Fr Helio, the Ministers of Education and the families of the children of Letefoho all believe in the need for good education to enable a better future for the people and economy of Timor Leste.

A newly renovated, cared for school in Timor Leste has the capacity to attract "better teachers" and keen students, whose parents see that paying for an education makes it worthwhile. The school fees for this school are $4 per month, which for some families is a struggle.

People of Timor Leste are very proud and want to be self-sufficient. They want to give their children the best they can, as do most parents. This school gives them hope! It is something to be proud of in the knowledge that through education their children will have better opportunities.

The parents, children and teachers of the Letefoho High School are so very proud of their new school. They are incredibly grateful for the generosity of all who have contributed to the fundingof the renovations.

LETS thanks you for helping us “help them build a better future”.

Images from the official opening ceremony.